WWE has a problem, they have a monster among men going after 2 belts at once. The problem is most people, I included, believe he can and should win the tag belts. Why? Well...look at him. This is a monster that has flipped a semi-tractor, pulled down a large scaffolding, survived a major ambulance crash, a garbage truck couldn’t crush him, he’s destroyed rings, cages, and an orchestra of instruments, and he can take 5 top guy finishers and stand back up.

For the story, should he win solo? Yes. Why? Look at him. Need I say more? Get these hands.
Can he survive losing the titles? Yes. At this point, he is almost Teflon. No one will remember or care if he gets screwed out of the titles later down the road. 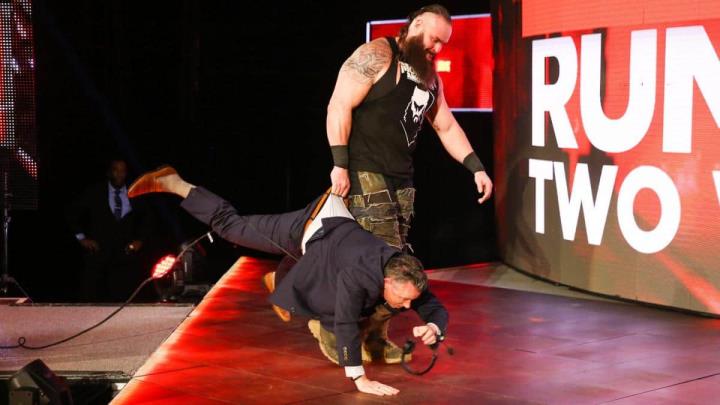 In my fantasy booking world, I want him to take the titles. Defend them, maybe say his tag partner is These Hands. Perhaps have a 6 month run as the Tag Champion. Then maybe take a partner by force that helps him lose those belts. To me, this would be better than him always coming close to the big title, just to have it whisked away.

Braun is on fire in the WWE, they have to put something on him, and soon. He is following the path of the Undertaker, but somehow, more unstoppable. Can he be beat? Well yes, we have seen him lose, but who cares. The monster can be beaten, but he just comes back, meaner, stronger, and faster. A taste for gold might be something to focus the destruction as his in-ring talent grows.

In the end, if Braun brings Moppy out and stands it in a corner as his partner, I am sold. I think most people are sold too. WWE would be missing a huge moment by not crowning the Monster among Men THE tag team champion.

I would love it most if he just sat Alexa on the corner turnbuckle, just to watch him win. Hero for life if that happens.

"Some Ahole from Michigan"? HAHAHA.

Or MR. ANDERS, kind of a play on MR.ANDERSON.